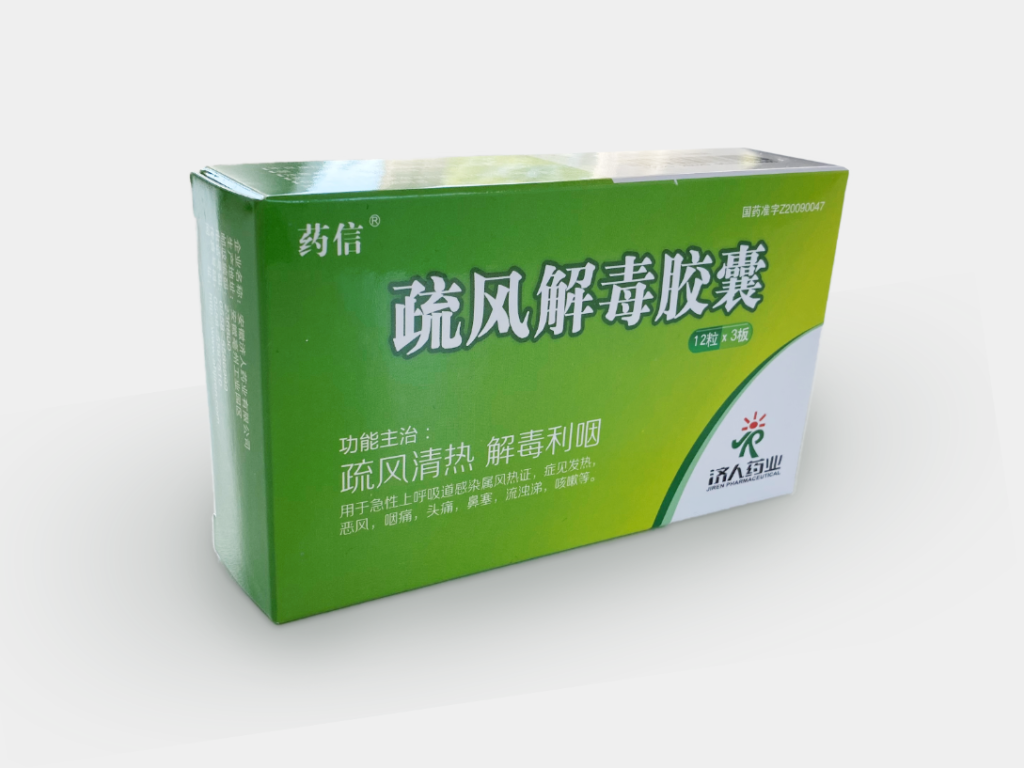 a medicinal product for treating influenza, SARS and Covid-19

Pandemics and epidemics involving newly emerging viral diseases are a considerable burden for public health and the global economy.

In China, a combined administration of antiviral treatments with virustatics such as Oseltamivir (Tamiflu), Zanamivir, Remdesivir, etc. and traditional Chinese medical products (TCMs) are considered as a major advantage for achieving both clinical-therapeutic efficacy in the area of virus prophylaxis as well as in the treatment of newly emerging infectious diseases.

In this context, Shufeng Jiedu (SFJD) has proven to be one of the most important Chinese medicinal products, which has also been successfully used to treat Covid-19 in China.

Shufeng Jiedu is a plant-based TCM preparation for the treatment of infections of the upper and lower respiratory tract which has been approved as a medicinal product in China since 2005. The approval was granted by the pharmaceutical company Anhui Jiren Pharmaceutical Group, in which active substances are produced in accordance with European GMP standards. For nearly 40 years, Jiren has been active in the areas of processing and finishing  high-quality TCM products and operates as manufacturer of so-called compactates which are made from plant-based crude drugs.

This (SFJD) preparation has been used in China for treating respiratory diseases for more than 30 years to combat symptoms such as fever, sore throats, headaches, coughs and colds – and in particular influenza.

During the pandemic of 2002/2003, Shufeng Jiedu was used to treat SARS as a traditional Chinese preparation with good success. After its successful use and positive studies on its efficacy in the treatment of influenza A (H1N1) and avian influenza (H5N1), Shufeng Jiedu was approved by Jiren as a medicinal product for diseases of the upper and lower respiratory tract in 2005. In 2009, the Chinese government recommended Shufeng Jiedu for the treatment of the upper respiratory tract in case of influenza A and avian influenza.

And also during the current SARS CoV-2 pandemic, Shufeng Jiedu has proven its efficacy for the treatment of COVID-19 and was often used in patients in China.

Of more than 1000 substances in this recipe, 85 have been identified as active substances. Clinical studies indicate that Shufeng Jiedu can be effectively used to combat COVID-19 pneumonia, i.e. in particular for the treatment of infections of the upper respiratory tract.
The effective antiviral plant-based substances emodin is contained in Japanese knotweed root, forsythoside is contained in forsythia fruit and verbenalin in verbena.

In a meta-analysis1), 13 randomised and controlled studies on patients with diseases of the upper respiratory tract, who received Shufeng Jiedu either as individual intervention or additional treatment, were systematically investigated. In doing so, 1036 patients (including 936 inpatients), who received SFJD in combination with an antibiotic treatment and standard care or solely standard care were compared. The average age of the participants was between 52 and 67 years, with approx. 60% male patients.

Shufeng Jiedu showed a significant reduction in treatment failure from 20.1% to 8.3% and indicates positive effects in combination with antibiotics and the symptomatic treatment aiming at the reduction of the hospitalisation period and the symptoms.

The underlying mechanism of action in Shufeng Jiedu

Hitherto, the mechanism of action of Shufeng Jiedu in viral diseases remained unclear. Now, Chinese scientists have succeeded in identifying this mechanism.2) 3)

A further study3) showed that various mechanisms are responsible for the active agents in SFJDC with an immunomodulating and anti-inflammatory effect resulting from their potential activity against the SARS-Cov-2 receptor.

In Chinese medicine, viruses are regarded as parasites or so-called pathogenic factors, which in compliance with Western medical concepts enter the cells and reproduce. According to TCM terminology, viruses infiltrate the organism with dampness, heat and toxins. Latest research indicates that Covid-19 can also cause thromboses, bleeding, skin rashes and neurological disorders. From the viewpoint of Chinese medicine, in such cases the pathogenic factor has deeply penetrated the organism as far as the blood layer. The presence of humidity-heat toxins in the blood increases coagulations, which in turn results in the formation of blood clots and thromboses in various organs. If the heat increases even more, there is also a risk of bleeding.

Here is where Shufeng Jiedu takes effect by channelling dampness, heat and toxins out of the body and thus fighting the cause of the disease, i.e. Dampness and heat. As Japanese knotweed root is a bitter, cold herb it eliminates heat and toxins and drains dampness. And also forsythia fruit and the Chinese bupleurum root are cold herbs which eliminate heat.

Production of Shufeng Jiedu as a medicinal product in Europe

On prescription by a medical practitioner or as prescription-free medicine from the pharmacist, the generic drug Shufeng Jiedu can be ordered as a standardised compactate blend at partner pharmacies of the European distribution partner, custom-made by the pharmacist and then shipped directly to the patient. The application period is 3 days. And the preparation is foolproof. The patient receives a bottle with the compactate blend and simply adds 200ml of hot water. The medicinal product must then be taken in doses of 20ml per use which can be dosed using the supplied measuring cup. Long boiling times as required for many Chinese herbal medicine are not necessary in this case.

Every single component of the Shufeng Jiedu compactate blend is tested by Prof. Rausch (biologist and chemist), qualified person at the company ConPhyMed Pharmaceutical in a GMP-certified lab, in accordance with the stringent provisions of the German and Chinese pharmacopoeia. In doing so, every single concoction is tested for residues such as heavy metals, pesticides, aflatoxins, microorganisms and other contaminants. And also the concentration of the active substances is tested in each plant. The plants are monitored by ConPhyMed from seeds over cultivation and harvesting to processing. This enables a comprehensive control of all production processes from cultivation to the blending in the pharmacy.

Shugeng Jiedu is produced in pharmacies as a so-called compactate blend. Compacates are active substances in pharmaceutical quality with a precisely defined therapeutic drug-extract ratio produced in accordance with the European GMP standards. After the plants have been dried and chopped, they are extracted in hot water, while maintaining their valuable ethereal oils. After that, they are gently dried under vacuum and processed to compactates with the addition of malt sugar. The great advantages of compactates for the user are their easy dosing and long shelf life, as they are only sparsely hygroscopic (water-attracting). From a legal point of view, the compactates have been classified as active substances by the German authority for health and consumer protection. This makes their use as source materials for the manufacturing of medicinal products in pharmacies entirely compliant with the application laws and regulations.

The active substance blend is available at the Bahnhofapotheke pharmacy in Kempten (www.bahnhof-apotheke.de), where it sold under the name of “CC08”. It is distributed throughout Europe